How do organisms cope with temporal fluctuations in their environment (for instance in weather conditions, food resources…)? In the context of climate change, where both the mean and the magnitude of fluctuations of numerous environmental drivers have been altered, this burning question has recently motivated extensive research in ecology and evolutionary biology, including our most recent work.

Not all demographic parameters in a population show the same curvature (convex, concave, linear) or the same degree of lability in their response to environmental variability. Some demographic parameters may be selected to be more labile, meaning they fluctuate more freely with temporal variation in environmental conditions (through convex, linear or concave responses; e.g., s1 and s2, and fertility coefficient f3 in Fig. 1). Others are selected to be more buffered to variation, meaning they do not fluctuate much with the environment (flat relationships, e.g., s3 in Fig.1). Studying how organisms may combine such lability and buffering of their demographic parameters across life stages to enhance population growth is then crucial to understand how they adapt to live in varying environments. 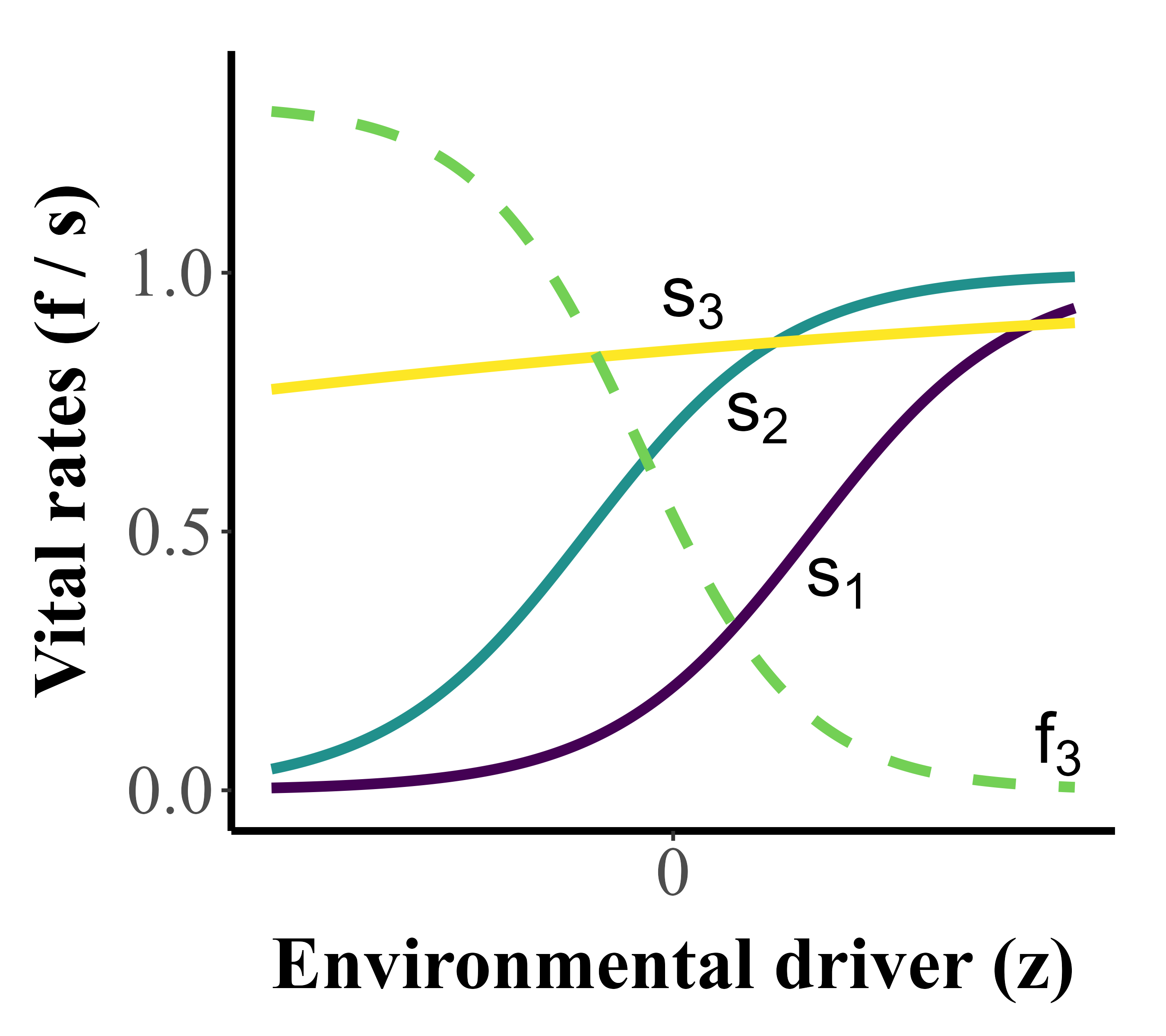 We then explored theoretically when labile demographic responses to environmental variability can lead to positive ln(λs) across generation time. To do so, we extracted 154 (st)age-structured matrix population models from COMADRE Animal Matrix Database, representing a broad range of realistic life histories (generation time from 1.1 to 265.6 years). Each selected population model defines the (st)age-specific demographic parameters in the mean environment, z= 0 (e.g., s1=0.2, s2=0.7, s3=0.85 and f3=0.5 at z= 0 in Fig. 1). We then simulated a stochastic environmental variable z and nonlinear functions with z for all survival probabilities and fertility coefficients in a population under 13 scenarios, varying the type of functions, the nature of buffered/labile demographic parameters and covariation among them (Fig. 2). For each population in each scenario, we calculated and decomposed the stochastic growth rate into nonlinearity and variance-covariance components.

Figure 2 – Left panel: Illustration of one of the thirteen scenarios considered in our study. For each population, we simulated buffered survival rates of all mature stages (SMature), and labile survival rates of immature stages (SImmature) and fertilities fj(z) (through logistic functions) that covary negatively. The shape of the functions varied for each stage j depending on sj(z=0) and fj(z=0); but only one function is shown for survival and fertility here. Mid panel: Stochastic growth rate ln(λs) across generation time (in years; 154 populations). The sign of the stochastic growth rate directly reflects whether the effects of environmental variability in this scenario are positive or negative in that population. Right panel: Decomposition of ln(λs) into main components capturing variance-covariance effects (blue triangles; ‘variance-covariance component’) and lability effects generated by nonlinear responses of fj(z) (red circles) and sj(z) (orange circles; the sum of lability effects for a population corresponds to the ‘nonlinearity component’). The positive nonlinearity component arising from overall convexity in the responses of fertility and SImmature to z, overcomes the negative effect of the variance-component (reduced due to negative covariation of the demographic parameters and buffering of SMature).

We hope this comprehensive framework to study how organisms adapt to environmental variability through demographic buffering and lability will help predicting (theoretically and empirically) population responses to changes in environmental fluctuations under climate change and other anthropogenic impacts. 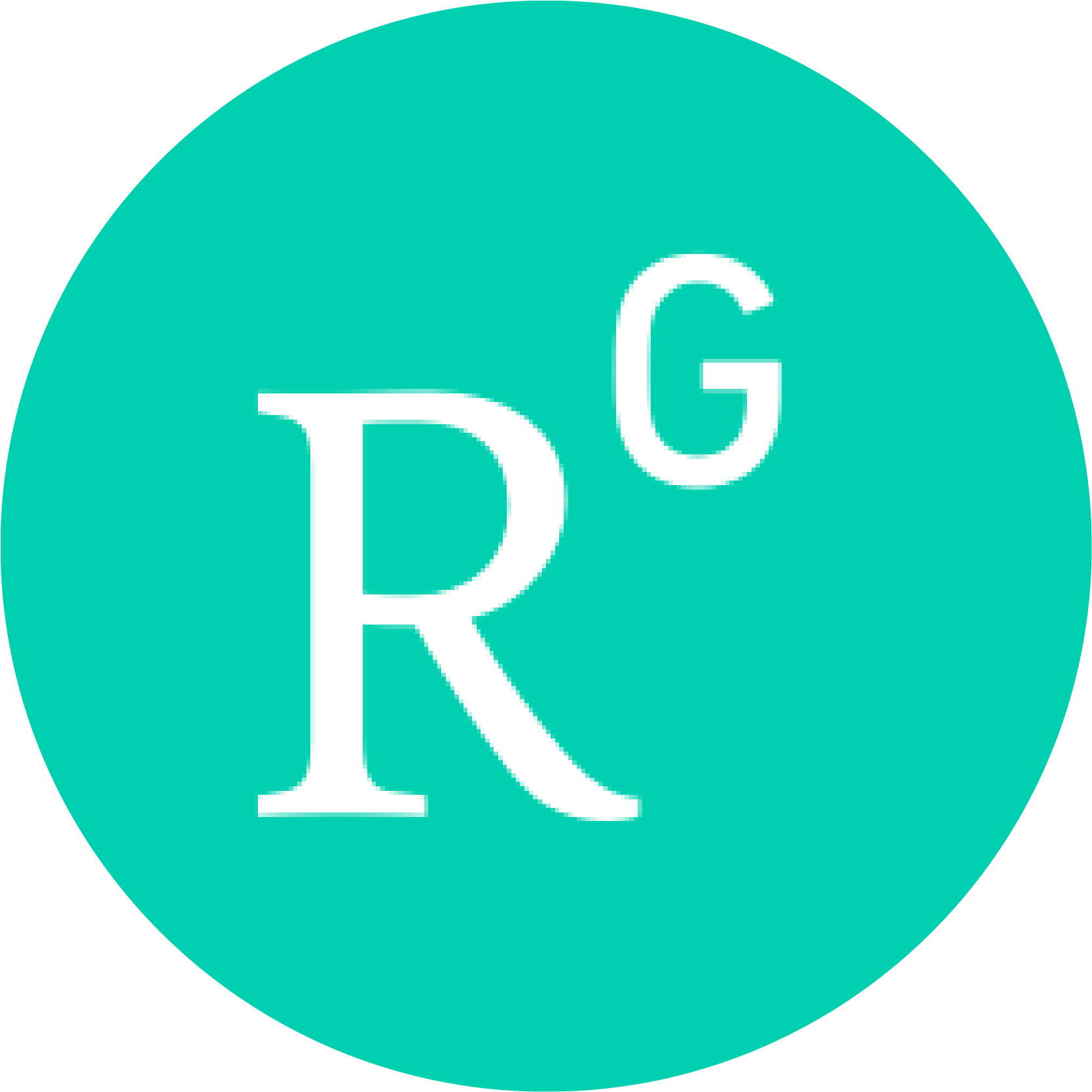